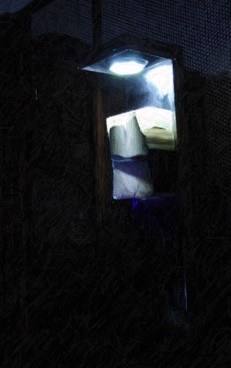 As the story goes, the creation of light was the first command given by the Creator.

“Light serves as a powerful metaphor of knowledge, clarity, warmth, spirituality. In art light can serve as a stand-in for the experience of higher states of consciousness. Artists through the ages have appreciated the attractive properties of light and incorporated its qualities into their works. From the reflective gold and jewels of Byzantine mosaics to the changing atmospherics of the Impressionists, from the dramatic chiaroscuro of the Baroque painters to the electrically powered pieces of contemporary artists, each era has found its own articulation for the divinely originated illumination.” Richard Bledsoe

Somehow the small cross sections  in this series, seemed to enclose vast tracts of sky and earth. They held a sense of great distances and the interplay of atmospheric conditions within the translucent resin casts. Clouds meet air and land near the sea. The smell of creosote, a natural desert plant in imbued in the wood a former railroad tie with years of service in my desert landscape and formerly a header in a territorial arch that once was part of my home/studio.

Light comes from two sources, a hidden LED light source which in turn radiates in the various layers of the piece that were cast with pearlescent and phosphorescent powders. An internal glowing light, a light from within is created with the phosphorescent layers, blues-greens and aqua colors.

There is a sense of reverence in the land around Taos; New Mexico, and Taos is an inspiration to my new work. My studio is both for the creation of my work, and is is a sacred space as well; working as an artist is a religious rite with me at time.I hope that my pieces  evoke a sacred feeling and can be hung in sacred places and created for prayer and meditation where you might feel the shadow of the spirit of God himself.

One thought on “Sacred Places-Sacred Light”